About the Literary and Debate Society

The Literary and Debate Society is established to provide students the opportunity toliberate their thoughts, and act as a platform to voice their opinions and sharpen oratoryskills. Literature is necessary to keep culture, art, heritage, tradition, and most importantlyimagination, alive. This Society aspires to create an environment to celebrate, discuss andpromote literature.
It is actively engaged in providing a substantial and unrestricted foundation for students toexplore the world beyond textbooks where the freedom of speech, dissent and discussionof significant social issues are vital for change and well-being of the society. It is keenlyfocused on providing all the necessary opportunities to the students of SLS-H to gain more confidence and promote interest in the debating culture. The Literary and DebateSociety thereby acts as the perfect platform for students to promote their interest inLiterature and Debating by holding National Literary Fest: the annual flagship eventwhich entails the National Parliamentary Debate, Mosaic: the internal flagship eventaimed to satiate the literary hunger, Book Discussions, Debate and MUN Training,Literary Workshops amongst the others.

The following have won prizes at various national debate competitions: 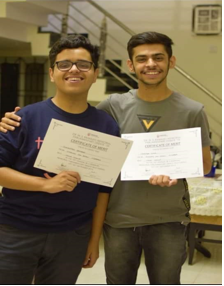