He also oversees Citi Security & Investigative Services (CSIS). Based in Mumbai, Pramod chairs the Citi India Diversity Council and is a member of various internal management and oversight committees. Pramod is also a member of Citi India's CSR Committee and from 2017 onwards, is Citi India CSR Champion for Pratham. Pramod previously worked with Induslaw, a law firm as a resident partner, overseeing its Banking and Finance practice. He joined IndusLaw in 2012 and was instrumental to setting up the firm's office in Mumbai. Prior to Induslaw, Pramod worked with ICICI Bank for 16 years. In August 1996, he joined the

erstwhile Industrial Credit & Investment Corporation of India Ltd (eICICI, which subsequently in a reverse merger became ICICI Bank) upon obtaining B.A.LL.B (Hons) degree from the National Law School of India University, Bangalore (NLSIU) after a brief stint at Mulla and Mulla Craigie Blunt & Caroe. He then rose to become the General Counsel of ICICI Bank in December 2005 and served in that capacity until April 2012. During the course of his career at ICICI Bank, Pramod has overseen the legal function for all segments of the bank. During his time there, he also advised the Board of Directors and various Board constituted committees and served on the Board of Directors of various ICICI group companies. Pramod is presently a member of the Legal & Banking Operations Committee of Indian Banks' Association (IBA) and of the National Committee for Regulatory Affairs constituted by the Confederation of Indian Industry (CII).

Pramod is the Chairman of the Fund Raising & Resource Mobilization Committee of IDIA – Increasing Diversity by Increasing Access – www.idialaw,com – an NGO dedicated to assisting students from underprivileged background entering premier law schools in India. He is also a member of the Governing Board of the NLSIU Alumni Association.

He is also involved in advising/mentoring LawTech startups, and currently serves on the Board of Directors of two such startups as a non-executive Director: Ameretat Technologies Pvt Ltd (which operates www.WillSecure.in) and Rainmaker Online Training Solutions Pvt. Ltd (which operates www.WorkSafe.co.in). He also participates in and contributes to various law and regulatory reform initiatives of the government, regulators and industry forums. 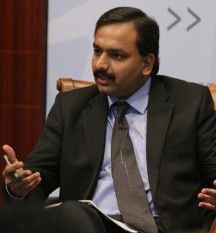 Sanjay Pulipaka is coordinating the East Asia Research Programme at the Indian Council for Research on International Economic Relations (ICRIER), New Delhi. Previously, he was a Pavate Visiting Fellow at the University of Cambridge, UK, and a former Fulbright Fellow in the Conflict Transformation Programme, in the United States. Sanjay’s areas of interest include India’s foreign policy, Indian politics, East Asian security issues, India-US Relations, regionalism and other related domains. Further, he has been closely following the political transition in Myanmar and conducted field research in that country and in Northeast India. He has substantive publication record with two co-edited volumes, policy reports, numerous research papers and Op-Ed essays. Sanjay also has extensive work experience with think-tanks and civil society organisations in India. He has considerable work experience in strengthening participatory political processes, governance frameworks and platforms for wider consultation.